I went on a exploratory trip to the Last Bookstore last Friday. What an exciting trip! 40 minutes just to pass the 405. Someone decided to attempt suicide during rush hour traffic. The 101 was closed and it took me a little over one hour and a half to reach downtown. My, when the city and the hospital present that guy the bill for failing to jump I think he will regret not choosing a more discrete part of the city for saying farewell to Los Angeles. If I were to kill myself in this city, I would drive to Point Dume, somewhere where I could at least see the sunset. Where would you kill yourself? The Grove? Griffith Park? It’s Halloween month. It’s okay to have morbid thoughts.

Anyway, my visit to the Last Bookstore was to do research for the official book launch of Love, or the Witches of Windward Circle, this coming Thursday. I still don’t know what I am going to do. What questions will I have to answer? But I learned that the Last Bookstore is pretty cool. I went upstairs to the labyrinth and took some pictures despite the warnings that tell you not to do so. Whether you go to my book signing or not — you should — the Last Bookstore is a must.

I also attended a presentation for Most Evil II, by Steve Hodel. He claims that his father was the Zodiac serial killer. And the killer of Black Dahlia. How fucked up is that? I bought the book. The presentation was very convincing and it will be good research material for the novel I’m working on, Coffe, Shopping, Murder Love, about two homosexuals, one with homicidal tendencies.

Most Evil II creeped me out, though. It is not based in some weirdo’s conspiracy theory, as it was my original guess, but serious detective research. The author used to be a cop. He compiled a lot of evidence. And he knew the murderer because he was his son! In your face, Luke Skywalker! 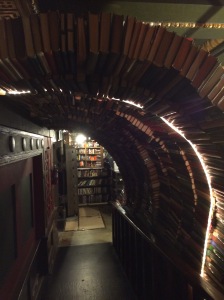 I think I should burn the book after I’m done with it, though. A lot of people die in Love, or the Witches of Windward Circle (Cuadrillas y Contradanzas had its fare share of innocent blood too) and I read pretty creepy material while writing it, a Dictionary on Witchcraft and the Malleus: [YAWNING] Oh, so the Devil did this and that? Cool. I guess I’m going to bed now, but witches are fiction. A trip to the Sabbath on the back of a goat is definitely not the the same as reading about real life events. I had to triple check the door lock off Friday night. And Most Evil II is not even written in a scary way, rather in a dry journalistic way, a bit clunky, I must say, but the evidence in Hodel’s arguments is quite convincing. It actually happened, and it could happen again. That’s the scary part.

If you’re too scared of the Slender Man, don’t read Hodel’s book. But if you’re not, you can buy Most Evil II at Rare Bird Books site.

Buy it in Amazon

iThere are no comments

Begin typing your search above and press return to search. Press Esc to cancel.